URBAN DEVELOPMENT &HOUSING DEPARTMENT
GANGTOK, SIKKIM
REBID
RFP No JNNURM / ULB -01 -2014
Re bid of the request for proposal for selection of State Implementation Consultant (SIC) for E Governance in GMC under JNNURM.
Date of Issue of Bids: 29.08.2014.
Last date of submission of Bids: 12.09.2014
The bids can be downloaded from website http://www.sipmiugangtok.org/tenders.html
Sd/
Additional Secretary
State Investment Program Management and Implementation Unit (SIPMU)
UD&HD, Govt of Sikkim
Ph: 03592-280781
R.O. No. 203/IPR/PUB/Classi/14-15

Email ThisBlogThis!Share to TwitterShare to FacebookShare to Pinterest
Labels: Rebid

Attention!: This is to inform all that due to some unavoidable Circumstances the 2nd Sikkim International Auto Expo will be held on 8th, 9th & 10th October 2013, Paljor Stadium, Gangtok. Time 11am to 4 pm.
WE INVITE ALL TO MAKE THE SHOW SUCCESS.....
Thanking you
Kolkata Auto Expo.
Posted by Sikkim NOW! at 11:54 PM No comments:

Email ThisBlogThis!Share to TwitterShare to FacebookShare to Pinterest
Labels: revision of Electoral Roll

Reggae lovers will have something to smile about this weekend, as Cafe Live n Loud will be hosting an acoustic Reggae night 'Azali' on 12 March where Estelle and Axel along with Groove Funk Odyssey will be performing live.
Posted by Sikkim NOW! at 11:52 PM No comments: 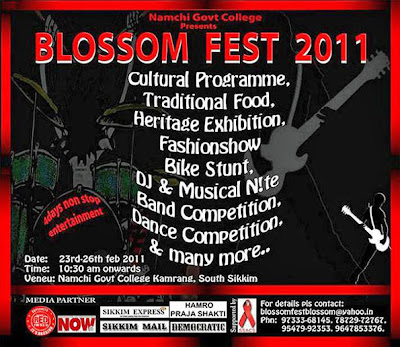 Email ThisBlogThis!Share to TwitterShare to FacebookShare to Pinterest
Labels: fest

GANGTOK, 01 Feb:
A three-day Public Information Campaign (PIC) on “Bharat Nirman” [centrally sponsored schemes underway in Sikkim], will be held at the Duga Block Administrative Centre in East district from 02 February onwards.
The programme is scheduled to be inaugurated by the Commerce & Industries Minister, Neeru Sewa, with the valedictory function to be presided by the chairman, Sikkim Industrial Development & Investment Corporation, Beg Bahadur Rai.
The campaign is being organized by Press Information Bureau (PIB) along with the Directorate of Field Publicity, Song & Drama Division, Kolkata, Doordarshan and All India Radio, Gangtok.
This will be the fourth PIC of the year. PICs are intended to raise awareness on Bharat Nirman projects through the seminars and infotainment capsules in rural areas.
The three day campaign will focus on the various flagship programmes being implemented by the Ministry of Rural Development through the State government, which includes MGNREGA, PMGSY, NRWDP, Rural electrification, SSA and Mid Day Meal, Jawaharlal Nehru National Urban Renewable Mission (JNNURM), Ayush & NRHM, Total Sanitation and Census 2011 in Sikkim and other centrally sponsored flagship programmes.
A free medical camp will also be organized by the Research Centre for Ayurveda, Tadong along with quiz, elocution, sit and draw competitions in parallel to it, it is informed.
Posted by Sikkim NOW! at 11:38 PM No comments: